Furnace Not Starting? Here Are Some Simple Reasons Why!

They’re Cheap to Fix Too!

When it comes to Murphy’s Law, your old furnace not igniting in the dead of winter is no exception.  You check your thermostat and it is set to the typical 68 – 70 F in heating mode, but no hot air is coming out of your supply registers.  You go downstairs to check on the furnace and you don’t see the flames from the burners on, but why?  Over a 50 percent of the time, the issue has to do with your furnaces pilot/ignition system and the good news is that most of the time the repair is fairly simple and cheap (even free at time).  So before you call your local HVAC tech and have them charge you a couple hundred dollars for a service fee to look at your furnace (I had a client charged $350 for a thermocouple replacement that costs $10 and 5 minutes to repair), continue to read this article to see if you can diagnose and fix the problem yourself.
Before we get started – It is important to make sure that the furnace has power and gas is still being supplied to the unit before proceeding because if they are not, that is why you unit is not working.  When you set your thermostat level to start the unit, you should hear the furnace fan turn on in preparation for the furnace to start.  If this happens you know the power is on, if not try locating the emergency shutoff switch nearby the unit (looks like a light switch) and flip its position (sometimes people accidentally flip the switch thinking its for lighting).  If gas does not appear to be flowing, check the gas shutoff valve to ensure it is in the open position.

Depending on when your furnace was manufactured and the quality of furnace you purchase, you will have one of three types of ignition systems.  While the ignition concept is fairly similar between each, knowing which type you have is essential for diagnosing any issue. 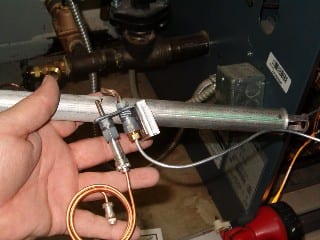 In this image, you can see what a standard thermocouple looks like.

Before you start the trouble shooting why your furnace is not firing, it is important you know which type of ignition system your unit has (I would look this up in your owner’s manual if possible).  Another way to determine if you have a standing pilot versus the electronic ignition systems is if your furnace gas valve says “on-off-pilot” versus just “on-off”.  Last note, I would go down the list below in order to troubleshoot from the easiest (and cheapest) issue to the slightly more difficult ones.

If your furnace valve says pilot on it, you have a standing pilot ignition system.  If it says just on and off its an eletric system.

If you have worked your way through each troubleshooting step and your furnace is still not igniting (or staying ignited) there is probably more complicated issue causing the problem.  At this point, it is best to call an HVAC tech to properly diagnose the issue.

How to Prepare your Home for Being Away on Winter Vacation How to do DIY Projects Safely, Properly and Efficiently
Scroll to top