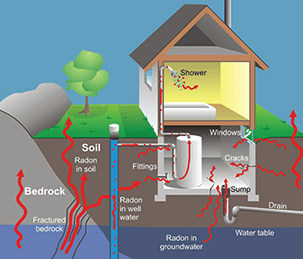 Similar to every other state in America, Illinois has radon levels. It is very common for homes to either have radon levels detected during a home inspection, or to already have a mitigation system in place.

That being said, just how high are radon levels in Illinois, and is this something that you should be worried about?

Here is everything that you need to know about radon in Illinois!

Radon is a gas that is produced within the Earth’s crust. It occurs naturally, and is formed within the rocks and soil in the ground that contain the element uranium.

When rock formations and dirt contain uranium, the element eventually breaks down due to normal weathering. When uranium is broken down, the process forms a gas, and this is known as radon.

Radon gas then needs to be released from the ground, and does so naturally by escaping either through the dirt or by dissolving into water and then dissipating into the air when the water hits the air.

Radon is actually within the air that we breathe everyday, however, it is a lethal gas when it cannot dissipate correctly and is trapped in a closed area. Only when it is trapped in a space does it become dangerous, because it becomes concentrated.

Radon can be released into your home through the floors – usually the basement since the gas cannot escape & comes in through the foundation – or through the water lines.

How High are the Levels of Radon in Illinois?

The average level of radon detected inside of homes in Illinois is 4.4 pCi/L.

This is higher than the national average of 1.3 pCi/L on the inside of homes.

That being said, the average level of radon that is detected in open air falls at 0.4 pCi/L. The national and state governments have pledged to make efforts at reducing radon levels indoors to below 3.0 pCi/L.

What Happens if Radon is Found in My Home?

While radon is very dangerous if it is not redirected out of the home and into a non-enclosed space, it is actually fairly easy to get rid of!

When you get a home inspection and the inspector finds that you have radon levels in your home, you simply need to have a radon mitigation system installed.

These mitigation systems are very effective, and once the system has been installed properly, you can rest assured that your home is safe. Just remember to have your home inspected every now and then to make sure that the system is working correctly, since radon is invisible and tasteless, it is impossible to tell if it is getting into your home without an inspection.

What is a Dishwasher High Loop and Why do you Need One?

What You Should Know About Building Codes
Scroll to top