One of the more misunderstood items that often gets flagged during a home inspection is old galvanized piping. A lot of times, when I am inspecting a house with galvanized piping, there are no symptoms of low water pressure or rusty water, but it is still reported because there is some likelihood these issues will occur in the future. This article talks more about what galvanized piping is, the problems that typically arise from it being installed, and what to do when it starts going bad.

How are Galvanized Pipes Made and When Were They Installed?

The process of coating iron or steel with a protective zinc layer is known as galvanization. Galvanized pipes are simple steel pipes dipped in protective zinc coating, which helps to prevent it from rusting and from corrosion. Galvanized pipes are still prevalent in residences, which include family communities all across the United States. The galvanized piping system was started back in the 1960s as an alternative to lead pipes, and there is an ample chance that if your home is built in this period, it has a galvanized plumbing system. Freshly installed galvanized plumbing worked without any issues for almost 30 to 40 years, but after that, problems started popping up.

Some of the most common issues which arise due to galvanized pipes include: 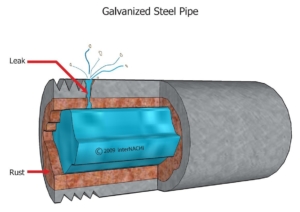 Building up of Rust Resulting in Clogging: Over time, galvanized pipes become a victim of rust and corrosion. Galvanization does not prevent or stop rust, and over the years, the protective zinc layer becomes fully corroded. The rust inside the galvanized pipes makes the water passage smaller, which affects water flow and causes clogging.

Leaks and Low Pressure: Homes having galvanized pipes can suffer from water problems such as low pressure or leakage of pipes. This is another result of the pipes rusting over years of use.

Health Risks: Impurities like lead and other heavy metals are present in the zinc layer of galvanized pipes, which can cause serious health issues if not correctly filtered at the tap.

Rusty Brown/Yellow Water: After being corroded for a while, the iron gets into the water, making it change color to rusty brown. If you continually have brown or yellow water, it might be a sign that some of your pipes need replacing.

How to prevent and solve the Galvanized pipe issue?

Complete Re-Piping: This is a costly approach, but if pipes are near or at their life expectancy, it is preferred to replace it before more serious issues arise. Copper is a better replacement option that will last longer than galvanized pipes.

Partial Re-Piping: It is a faster and also cheaper option. It stops issues like leakages. The problem with this option is that whenever an old galvanized system is broken apart, the rust inside the pipe is also broken. That rust can then feed through the plumbing network and can cause significant issues at fixtures.

Pinhole Patch Up: This is the most cost-effective option. A patch up stops immediate current problems but does not ensure that these problems will not appear again. This option is for the short term but helps the person to buy some time for planning a long term solution.

It is best to replace your old Galvanized plumbing with a newer system like copper before or at the earliest signs that the system is beginning to clog and/or excessively rust. As always, consult with your trusted neighborhood plumber to ask for their recommendations, as everyone’s situation is different.